The exact location of the Upper Treak Cliff Blue Vein, the ‘Lost Vein’, was lost in 1945 on the death of the old miner John Royce, but was re-discovered 68 years later in January 2013 by Gary Ridley and John Turner (pictured below), today’s Blue John miners at Treak Cliff Cavern.

This is story of how a vein of Blue John was discovered, lost and rediscovered over a period of nearly 7 decades…

In 1945 the Harrison family, having been at the Speedwell Cavern since 1942, were offered the lease of Treak Cliff Cavern by the landowner, Colonel Broadbent. The outgoing tenant John Royse had carried out the construction work to convert Treak Cliff from just a Blue john mine to a show cave in 1935. By 1945 he had become ill and as part of the handover to the Harrisons he showed them the ‘ins and outs’ as it were, of Treak Cliff Cavern.

The second time John Royse took Peter Harrison round, they were in the Witch’s Cave at the top of the long flight of steps on the visitor route. Peter remembers John waving his hand vaguely about and saying “before I finish here, Peter will you help me get some stone out?”

Peter agreed and they planned to get it out later. 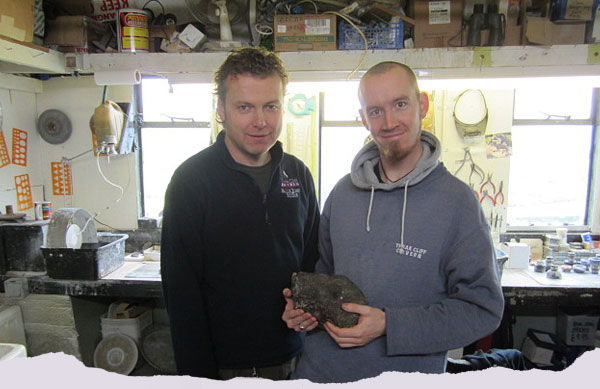 This piece of Blue John Stone is from the Upper Treak Cliff Blue Vein, the so-called ‘Lost Vein’. Gary Ridley, the Mining Manager is on the left with John Turner, miner and Master Craftsman on the right.

Sadly, before he could show exactly where the Blue John was, John Royse died. Peter had very little to go on – he was only 19 years old, Cyril Adamson his work and close companion, was only 17 years old. They spent many, many hours over the next 68 years looking either for a pile of ready mined stone, or for a vein in situ that John Royse had not already shown them. Eventually they believed it did not exist. 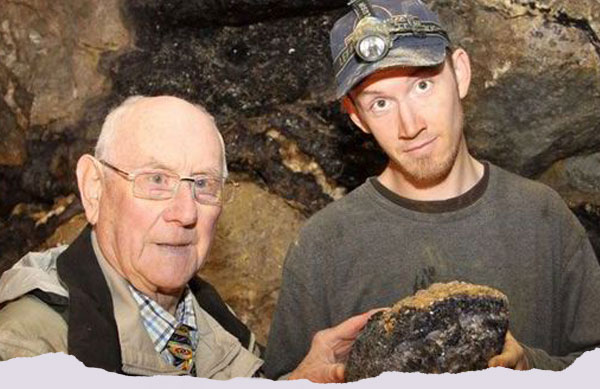 Peter Harrison and his grandson, John Turner, pictured in 2013 with a piece from the newly-rediscovered Lost Vein.

In January 2013 the current Cavern Manager and miner, Gary Ridley, with Peter’s grandson John Turner were prospecting in one of the mining areas off the Witch’s Cave. Unlike in Peter and Cyril’s days of mining, Gary and John use big bright mains powered lights, as well as head torches (not candles and carbide lamps!!!). They were tapping and scraping with hammers around the area, which has a lot of sticky orange clay, looking for the pointed corners of the cubic crystals that indicate where Blue John stone may be. The place they were in is part of a rough chamber/passageway leading to the rainwater collection tanks, and has a ladder on a sloping rock bank leading up to a higher level. Below the ladder something caught John’s attention so he dragged the clay by hand out of the hollow of crystals, and called Gary over.

John says, “There was approximately a metre length plate of crystals that we worked to clear. That first day we dug away as much as 2 tonnes of clay, and by 3pm decided to let the dripping water wash more away overnight.   The next morning we took better lighting into the area along with the big rock drills, but before any drilling took place we had to dig more clay. It was around 1pm that day we first were able to drill the limestone surrounding the Blue John, by the end of the day’s drilling we had exposed more of the vein we’d ever guessed existed. Then I told Gary about the carpet and wooden batons, he told me of the lost vein of John Royce, and that he had a particular way of covering his work. By the end of the day we had exceptionally beautiful pieces of stone we had not seen at the Treak Cliff for years. I worked with Cyril in the Cavern workshop when I was 11 years old, and tour guiding from 15 years old. Cyril and granddad tell me I have a gift for seeing Blue John”. 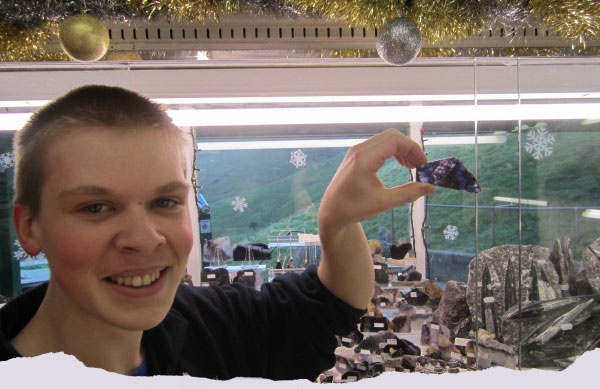 Jack Mosley and a polished specimen of ‘Lost Vein’

“The layout of that area felt wrong…”

Gary has worked 15 years at Treak Cliff and before that as fluorspar miner for La Porte in various mines. Before 2013 he had not really mined in the Lost Vein area. He says “the layout of that area felt wrong, we never found anything worthwhile up there – a lot of very dark crystals and calcite. There was always good ornamental stone in easier and safer to get out places elsewhere in the cavern, so that’s where we mined. John Turner is learning the trade so I took him into the lost vein area on a prospecting trip, really to see what might be in the walls, and he found the treasure in the floor!”

The first loose chunk lifted out is nick named ‘the hedgehog’, it weighs 7kg and is a large curled nodule covered all over in cubic crystals. The lost vein is part of the Upper Treak Cliff Blue Vein, not an entirely new variety in its own right, but is the start of a separate vein leading away into the ground, so its full extent will only be revealed with continued mining.

Interviewed towards the end of 2013 Peter said, “I really can’t believe it after all this time. We have walked over the location of the lost vein for years and years, but it was well and truly hidden, given the amount of clay John and Gary had to shift. I’ll be going back in to have another look when they set up for mining next January” 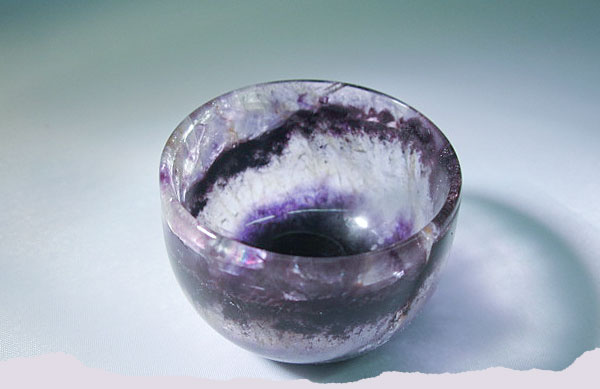 This bowl has been hand turned in the Treak Cliff Cavern workshop by craftsman Peter Sharp. 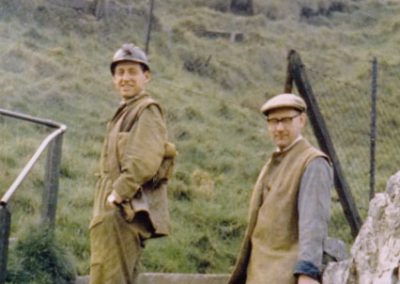 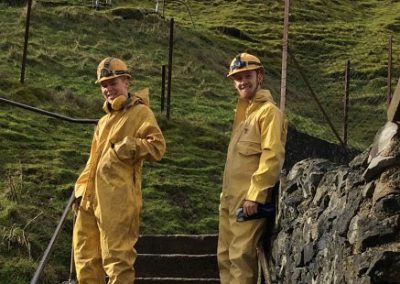 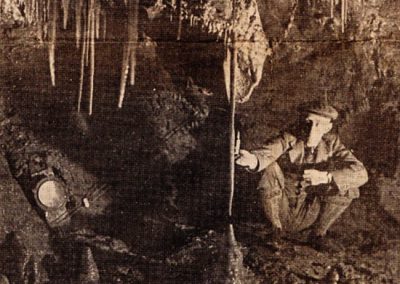 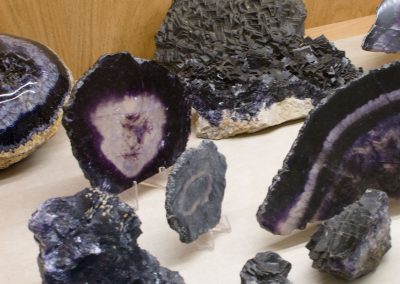 Samples in the museum 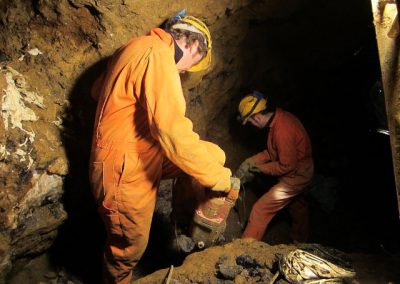 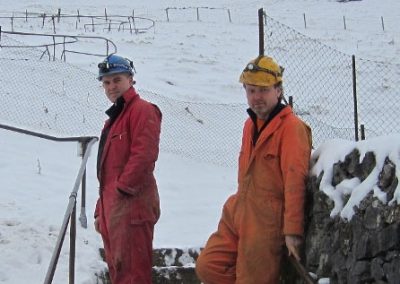 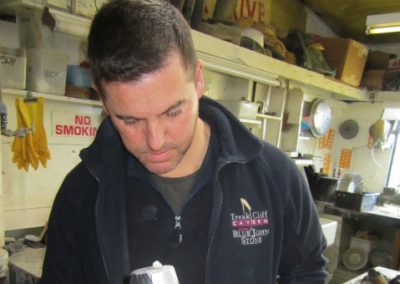 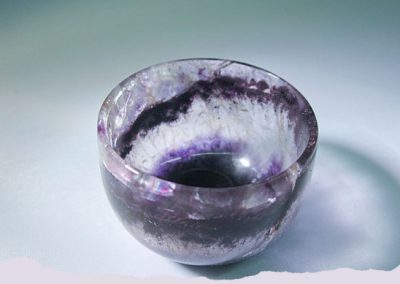 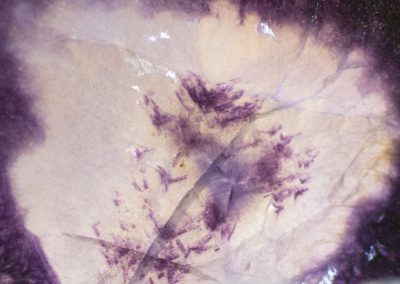 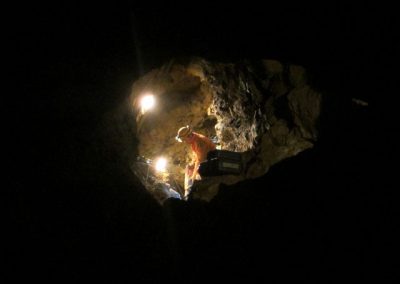